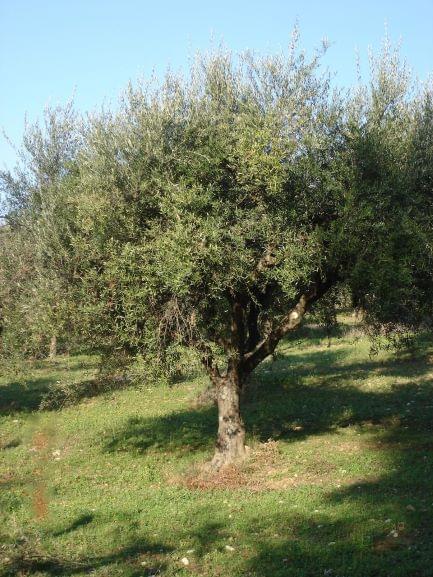 The Greeks were the first people to grow the olive tree in the European Mediterranean area.

It has been a sacred tree since ancient times and was under the protection of the goddess Athena.

According to mythology in the struggle between the gods for the promotion of the patron saint of Athens, which took place in the Acropolis, athena came out victorious by donating to the Athenians the first olive tree in the world which grew where it hit its war spear. Also the olive tree for the ancient Greeks was a symbol of the Olympic ideals and for this unique prize that the Olympic champion received was a wreath made of olive branch.

The olive or olive tree or olive tree (ref.Olive, Olea) is a genus of fruit trees of the olive family (Oleaceae), which is very often found in Greece. Its fruit is also called olive and olive oil is produced from it. The olive tree was the symbol of the goddess Athena.

The olive tree has been known since ancient times, and probably originates from the area of the eastern Mediterranean. According to ancient Greek tradition, the home of the olive tree is Athens and the first olive tree was planted by Athena in the Acropolis.

The Greeks were the first people to grow the olive tree in the European Mediterranean area. It was carried by either Greek settlers or Phoenician merchants. As Pliny says, in 580 BC, neither Lazio nor Spain nor Tunis knew the olive tree and its cultivation.

The olive gift of the goddess Athena

The olive tree has been a sacred tree since ancient times and is under the protection of the goddess Athena. As the ancient myth reminds us, in the struggle between the gods for the promotion of the protector of Athens, which took place on the sacred rock of the Acropolis, athena came out as the winner by donating to the Athenians the first olive tree in the world, which grew where it hit its spear. This tree was useful for the nutrition, lighting, heating, health and grooming of the Athenians. Since then the olive trees around Athens have become sacred. Woe betide anyone who dared to hurt them, since the punishment was ostracization or death.

Aristotle and the olive tree

The son of Kyrini and Apollo, Aristotle grew up near Gaia and the Hours, and was later taken over by the Muses and the Nymphs.

The Muses trained him in manic and medical art. The Nymphs taught him the art of beekeeping, the production of cheese from milk and the secrets of growing vines and olives.

More specifically for the olive tree, the Nymphs showed him the grafting of the wild olive tree, in order to give fruit and most importantly, the grinding of the olive fruit to get the oil, this precious product for the food and trade of the ancient Greeks. It is believed that Aristotle invented the oil press, making it easier to produce the oil.

The knowledge he acquired near the Muses and Nymphs, Aristotle spread it to people, traveling to many parts of Greece, Sardinia and Sicily. He was worshipped as a rural god and even a god – protector of olive growers, especially in the Aegean islands and especially in Kea.

The olive tree as a symbol

Due to the important role played by the olive tree over the centuries in the everyday life of the peoples of the Mediterranean and especially in Greece, the branches, the fruit and the olive oil, the “juice” of the olive tree, have a symbolic character and hold an honorary position in various activities of the life of the inhabitants of the region.

The olive tree in sport

Bronze boxer’s head at the Archaeological Museum of Athens. The athlete is crowned with a coton, from which only the stem is saved.

Sources say the first six Olympians had an apple as their prize. Then it was established as a prize of the Olympians the kotinus, the wreath of a branch of the sacred wild olive tree that had sprouted outside the back of the temple of Zeus in Olympia. The sacred procession in the streets of Athens was attended by the thyllors, old men nice and responsible, who held in their hands olive branches.The Athenians, who considered themselves civilized, held olive branches, while the emancipated slaves and barbarians held oak branches, since the oak marks primitive civilization, roughness and brutality.Interestingly, the Olympic Games were called coronites or sacred since the prizes are simple crowns, unlike Panathinaia which were moneymen, where the prize of the olive wreath was accompanied by heavy material prizes.

The olive as a decorative element

In a sign of the appreciation shown by the peoples of the Mediterranean to the olive tree, many everyday objects are decorated with motifs consisting of branches and fruits of the olive tree. Thus, we often find in Greece and other Mediterranean countries the olive tree adorns clay and wooden objects of everyday use, linen, jewelry, etc. In recent years, the use of olives in weddings and baptisms has become particularly popular, both as primary material (bridesmaid wreaths at a wedding, lamp decoration) and as a decorative element (wedding wreaths in imitation olive wreaths, bonbonières, etc.).

The olive tree in arts, culture and education

Constituting an important part of the diet but also the economic life of the Mediterranean and Greece in particular, it was inevitable that the long course of the olive tree had penetrated the artistic and cultural life of the inhabitants of the region. Inspired by rural life in the southern French region, dutch painter Vincent van Gogh created olive-themed paintings. The poet Kostis Palamas mentioned the olive tree in his poem of the same name, while in the folk songs there is often reference to the olive tree and its fruits.

Olive and oil museums exist in many olive-producing areas of the Mediterranean. These museums present exhibits related to the cultivation and harvesting of olives and the production of oil, and educational programs are often carried out for students. One of the most famous Greek olive museums is the Museum of Olive and Greek Oil in Sparta.Interesting is the Pylaros Olive Museum in the settlement of Makriotika in Kefalonia, a small museum in a restored mill with original machinery from the late 19th – early 20th century. The “Mediterranean Olive Museums” Network currently includes over 15 museums from across the Mediterranean basin.